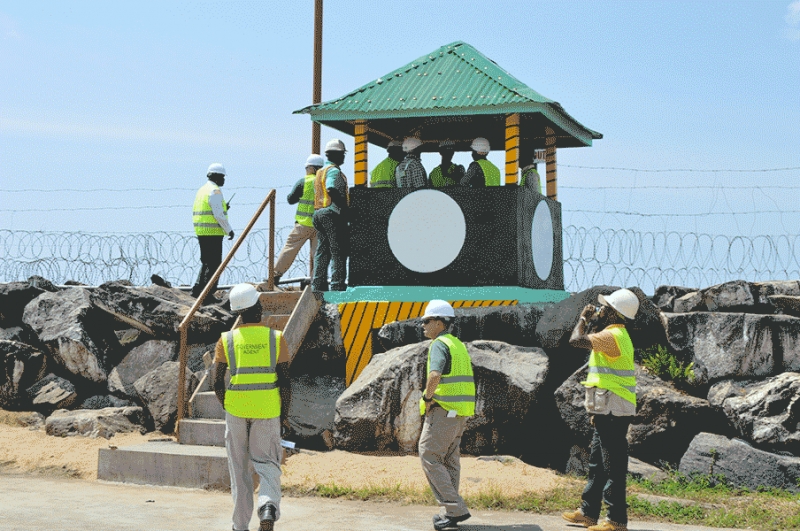 Pursuant to the Management’s vision to maintain and improve the ISPS Compliance status, the Safety and Security Division was established with a core mandate to focus on the wellbeing and welfare of employees, customers, and visitors to the NPA port network. The Division has both administrative and operational functions through which it is responsible to prepare and implement Rules and Regulations pertaining to Personnel, Finance, Logistics, Training, Research, Planning, Operations, and other structural and disciplinary policies necessary to manage the division and effectively protect people and properties. The Port Authority’s first fire chief was promoted and given full employment status along with her colleagues. The objective is to make the fire department one of the most highly trained firefighting forces in the country. Our firefighters underwent several pieces of training in emergency response in 2014, while our fire trucks were repaired to arrest any outbreak within our network and port communities. The department distributed 50 pieces of ABC dry powder fire extinguishers to various departments and locations within the NPA network including our outports. Hardening defenses is a constant task. In 2014, that included ongoing perimeter fence replacement at the Freeport of Monrovia including perimeter fencing projects at Buchanan and Greenville Ports. The Liberia Seaport Police (LSP) provided a round-the-clock emergency response on Port Authority facilities and coordinated activities with local law enforcement agencies. The LSP works in concert with surrounding law enforcement and emergency management agencies, particularly the Liberia National Police (LNP) to ensure a coordinated response. The LSP enforces also implements and enforces ISP's procedures and NPA policies and regulations within ports; arrest, temporarily detains, and subsequently prosecute violators. The LSP reported 31 cases, investigated seven, and sent 12 to court while 12 cases were withdrawn and 12 other cases are pending further investigation. They successfully delivered and exited 21,516 full containers and 2,934 vehicles as imports across our network and conducted regular drills and training of personnel on ISPS awareness. Twenty-three other 23 LSP and North Star Guards were also trained on ISPS awareness at the Port of Buchanan, while 100 LSP personnel and North Star Guards started their ISPS training at the Freeport of Monrovia for “Personnel With Security Duty in Ports” facilitated by the Liberia Maritime Training Institute. In 2014, the International Ship and Port Facility Security (ISPS) Department conducted regular periodic inspections of all ports in Liberia including drills and exercises and created ISP's policies and procedures for ports. The ISPS Department also monitored the implementation of ISPS procedures and policies by LSP at ports including the production and issuance of Access Passes to ports users, among others. In January and April 2014, the US Coast Guard teams headed by Cdr. Kevin Reeves and Cdr. Tanya L. Giles inspected the Freeport of Monrovia and the Port of Buchanan. The ISPS Compliance Officer of the Liberia Maritime Authority (LiMA) and the team also inspected the Freeport of Monrovia and the Port of Buchanan in June, August, and November 2014. Emergency response exercises, communication and equipment drills, and access drills were conducted at the Freeport of Monrovia and our outports. Also conducted were emergency response drills on (Ebola Preventive procedure exercises at the Freeport of Monrovia. Our Buchanan Port received the long-awaited vessel, MV Vega, in November with Six Hundred (600) containers with Ebola supplies o support the fight against the Ebola disease. On November 18, 2014, the DMD/A and two (2) personnel from the CDC arrived at the Port of Buchanan to conduct Ebola Awareness Prevention Training for the US Army Officers of MV Cape Wrath and MV Cape Rise and conducted Ebola awareness training for over 150 US Army Officers.